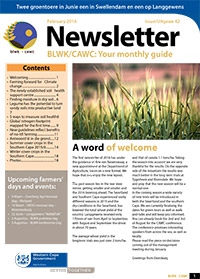 The first newsletter of 2016 has under the guidance of Arie van Ravenswaay, a new appointment at the Department of Agriculture, taken on a new format. We hope that you enjoy the new layout.

The past season lies in the rear view mirror, getting smaller and smaller and the 2016 looming ahead. The Swartland and Southern Cape experienced vastly different seasons in 2015 and the dry conditions in the Swartland, has lowered the total wheat yield of the country. Langgewens received only 170mm of rain from April to September, with August and September the driest in about 70 years.